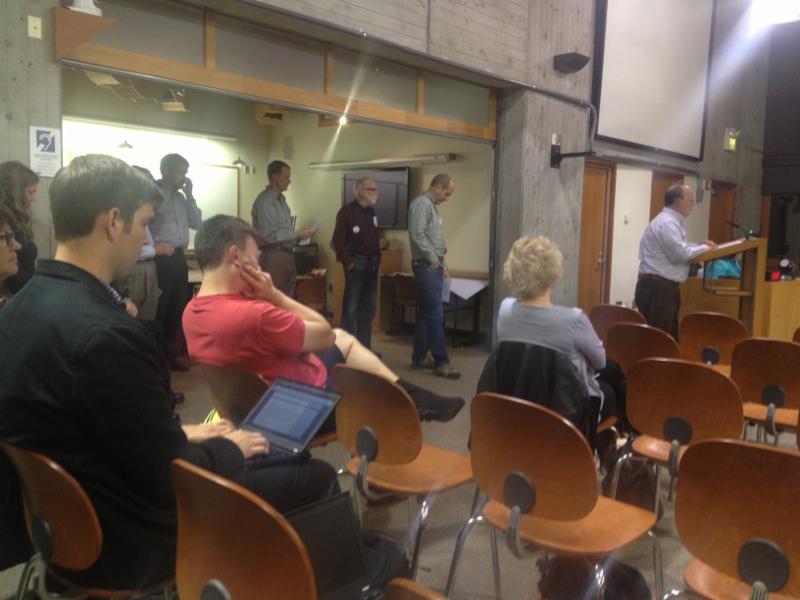 Seats emptied as people stood up to speak in support of public power. Ted Jones at the podium.

Bainbridge Island, WA — TEN amazing people stood up and spoke in support of public power including Phil Rockefeller! We crossed the first major hurtle and have shown adequate support for our initiative. The council did not give us a threshold number, but instead asked the City Manager Doug Schulze to create a list of possible items to study and resources needed to see if public power makes sense for Bainbridge, then, if it does, create an ordinance and put it on the ballot. Thanks to everyone who showed up for a late-night council meeting and for all those cheering us on via email and social media.

If you missed the meeting you can view all the speakers here (at about the 2hr mark the comments for public power begin): http://apps.bainbridgewa.gov/media/video/2015/SS_20151006.mp4

As Barry Peters’ succinctly noted:
“There is an opportunity for City Council members who see the importance of clean green power, resisting climate change and supporting a sustainable local economy, family wage jobs and democratic community control, to move the City’s feasibility analysis forward expeditiously so that a City ordinance is ready next year in time to give Bainbridge voters a chance to support this when they turn out massively in the presidential elections of November 2016.

Our friends on City Council who are visionaries in these respects can achieve a legacy by having this study move forward to a City ordinance that is approved by Bainbridge voters during their current term in office, in this 25th year of home rule for Bainbridge Island.”

Hot Off the Presses:
Recent article about our initiative by Inside Bainbridge: Island Power or PSE? Parties Weigh in Before Tonight’s Council Discussion

Let’s be the generation that takes the first step.